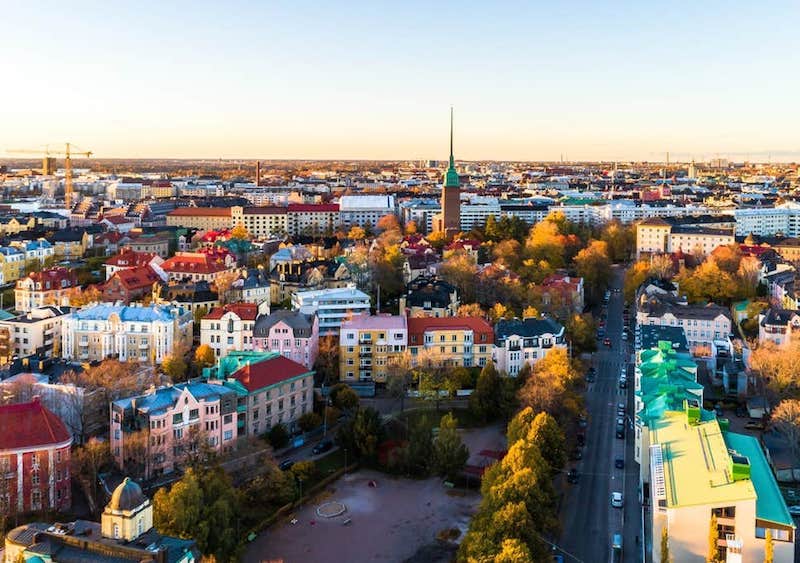 The latest World Happiness Report was just released, and for the third year in a row, Finland is the world’s happiest country, followed by Denmark, Switzerland, Iceland, and Norway.

The results are based on Gallup poll data of 1,000 people from each of 153 countries over a three-year period. The report ranks each country based on the average result of the polls. Respondents in each country are asked a basic question:

For the first time, the survey also ranked the top cities, with the following results:

The highest-ranked U.S. city was Washington, D.C., coming in at number 18 (Philadelphia was number 28).

The study also examined urban-rural happiness differentials across the world. In line with earlier research, the study found that urban populations are, on average, happier than rural populations in that they return higher levels of happiness.

Perhaps the most interesting chapter in the report was one that tried to explain why the Nordic countries are constantly among the happiest in the world.

Here are some of the conclusions reached by the research team:

In a New York Times article about the happiness study, reporter Maria Cramer notes that the Finns pride themselves on their stoicism, something that may not often be associated with happiness.

However, as John F. Helliwell, an editor of the annual happiness report, points out, happy people may not have the highest smile factor, but they do trust each other and care about each other, and that’s what fundamentally makes for a better life.

The Times article also notes that richer countries are happier than poor ones.

Jeffrey D. Sachs, a professor at Columbia University and director of the United Nations Sustainable Development Solutions Network, which publishes the annual report, notes that unlike the United States, where a loss of faith in institutions has dovetailed with the drop in happiness reported by Americans, people in Scandinavian countries believe in one another and their governments.

In Finland, 91 percent of survey respondents reported being satisfied with their president and 86 percent said they trust the police. I don’t know what the corresponding numbers are for the U.S., but I think we can all agree that they ould be substantially lower.

Sachs relates these results to the covid-19 pandemic, noting that the idea that we’re all in this together is really being tested. “We’re going to have to find that common sense of shared responsibility to pull through the crisis.”

Compare this to what Frank Martela, a Finnish philosopher who contributed to the report, has to say about things in Finland at this time:

“Every time the president or the prime minister holds a public speech about the issue, the overwhelming response is one of trust and commitment. People are stating and feeling that we are in this together.”

Mr. Martela added that Finns were volunteering in large numbers to go to the grocery store for others and had started campaigns to help artists and other people whose livelihoods are threatened by the crisis.

Of course, such altruistic behavior is not limited to the Finns, and I am sure many of us in the U.S. have seen such acts of kindness during the coronavirus crisis.

But despite such generous behavior, there is still a divide between people in the U.S. All you have to do is look at polls involving President Trump and Congress. There is both a wide divergence of opinion regarding their performance as well as an overall lack of trust in our leaders.

And if you wonder if such opinions and attitudes have an impact on one’s happiness, the U.S was ranked number 18 in the world…

We can do better. And to fight covid-19, we must do better.

*image from the Independent

40 thoughts on “What Makes the People of Finland So Happy?”