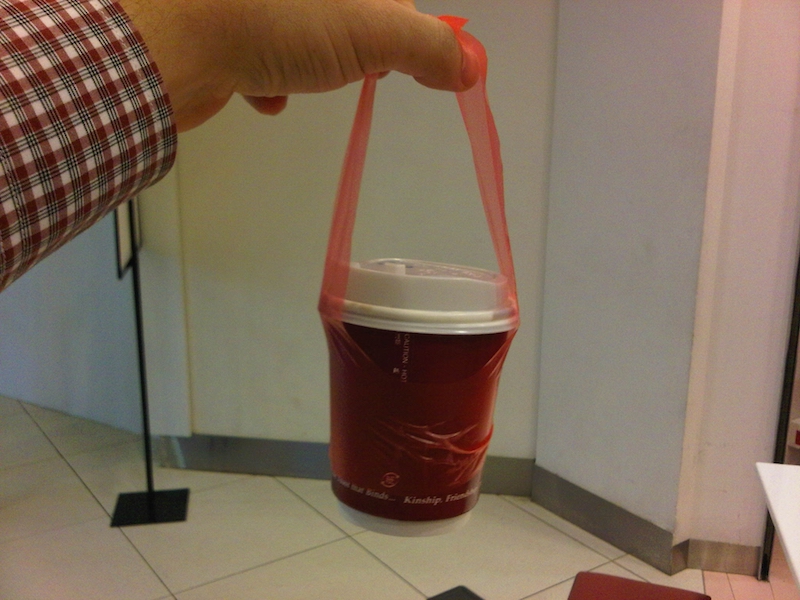 Here is the email:

One grocery store I shop at charges a nickel for paper bags, while the other gives me a nickel when I bring my own bag. Which approach is more likely to reduce paper-bag use? —Paul

And here is Dan’s response:

Charging for bags is an increasingly popular strategy for reducing waste. New York State’s new ban on plastic bags, which goes into effect on March 1, allows cities to charge a five-cent fee for paper bags. This raises the general question of whether punishment or reward is better at changing our behavior.

Punishments are very powerful for motivating people to do something that they only have to do once—for example, installing a smoke alarm in their house or immunizing their children. But when it comes to repeated behaviors, positive rewards are more effective. In a 2011 study, researchers found that when physicians in a hospital were given positive feedback for washing their hands, they were much more likely to do it regularly. The same principle should apply here: Offering shoppers a credit for bringing their own bag should yield better results than charging them a fee.

I’m sure many of you have been subject to such policies, and we have seen it in Singapore. The grocery store we go to charges 20 cents extra per shopper transaction if the shopper does not have their own bag. It is interesting to note that it is 20 cents per transaction, not 20 cents per bag.

The grocery store chain that is doing this has implemented this policy first as a trial, and has been slowly expanding it across its chain of stores. The CEO of the chain notes that “Changing behaviour takes time, we recognise that…”.

The CEO went on to say that 71.1 percent of the 1,745 customers surveyed expressed support for a plastic bag charge at supermarkets in the consumer sentiment study conducted at the seven outlets during the month-long trial. He also acknowledged that while there are customers who believe the charge should be much higher and per bag instead of per transaction, there is also “a much smaller group who needs more convincing”.

The CEO also notes that reducing plastic waste is a “multi-stakeholder journey” that “needs to take place over a sustained period of time”, with individuals and corporates sharing the responsibility.

So I guess this approach would fall under the punishment method that Dan Ariely refers to. I have not seen a store in Singapore which takes the reward approach by paying customers for bringing their own plastic bag.

I have seen both approaches in the U.S., and I wonder if there is a cultural reason for the discrepancy in that Singapore focuses on a punishment approach, and it seems to work here, while in the U.S. firms seem more willing to try the reward approach, which as Dan points out, may be more effective. But that may just be in the U.S. culture.

I have to admit that I am surprised with Dan’s answer.

There is a great deal of research from behavioral economics which finds that people would rather avoid a loss than take a chance on a gain.

Charging people for using a plastic bag seems like it falls into the loss category; shoppers would rather avoid that 20 cent loss than receive a 20 cent reward by bringing their own bag. Hence, it seems that the Singapore approach would be more, at least in terms of what loss prevention research seems to suggest.

And I think I would be more motivated to bring a plastic bag if I knew I would lose 20 cents if I failed to do, rather than being motivated about getting 20 cents if I did bring a bag.

I also find it interesting, and admirable, that Singapore is trying to cut back on plastic usage. However, I also find that certain businesses use a lot of plastic.

Again, like the coffee holders, I can’t fathom how many plastic bags they must go through in a year.

I should point out that despite being personally motivated to want to avoid that extra cost for using plastic bags, many times I end up having to pay the extra cost because I usually forget to bring my cloth bag, despite having way too many cloth bags sitting right inside our front door.

So it looks like neither incentive would work for someone like me, at least not at the extra cost of 20 cents. On the other hand, If it was $20 charge, I would leave my groceries at the cashier, drive home, come back with my cloth bag, and then go merrily on my way.

So perhaps it’s not strictly the reward or punishment approach that needs to be looked at, but at what dollar amount would someone modify their behavior.

For me, I guess it’s somewhere between 20 cents and 20 dollars…

28 thoughts on “The Age-Old Debate – Reward vs. Punishment”