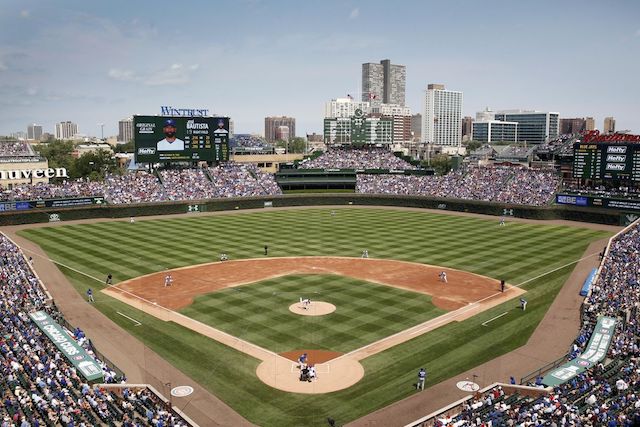 That was one of the questions on today’s episode of “America Says“, a game show hosted by John Michael Higgins (one of the commenters in the movie Pitch Perfect) and broadcast by Game Show Network. The series, which premiered on June 18, 2018, consists of two teams of four guessing the top answers to fill-in-the-blank survey questions.

Each team is shown a fill-in-the-blank and its top seven answers, with the first letter of each word in each correct answer being shown as a clue. For example, if the question is “When I think of Italy, I think of [blank],” an answer might be ” L______ T____” for Leaning Tower. In addition, the length of the blank spaces indicates relatively how long each word is. Also, the most popular answer is displayed in the middle of the screen with the largest letters.

Here’s an example, for those of you who have never seen the show:

Well today’s show had the question, “When I Think of Baseball, I Think of [blank]”

I don’t have a screenshot of the game board, but here were the first letters of the seven answers:

The H____ D____ was the answer in the middle of the board, with the largest letters, representing the most popular response in the survey.

I usually watch this show every Sunday morning, and it’s a fun game to play along with, since you can usually guess most of the answers.

For this question, I correctly guessed World Series, Home Run, and Yankees. I thought the P was for Pitcher, and the S would be for Strikes and B R might be for Base Runner. And I could not think of a single response that seemed to fit H____ D____. And neither could the first team trying to solve the puzzle.

When it was time for the second team to try, they did guess correctly.

Do you know what it was? What’s the first thing that comes to your mind when you think baseball?

If you said Hot Dog, you would have been correct.

And I was stunned.

The first thing that most Americans think of when they think about the great sport of baseball, our national pastime, is Hot Dog? And that wasn’t the only food answer in the top seven responses. The P was for Peanuts.

Peanuts I could live with, after all, it’s in the famous song, Take Me Out to the Ballgame.

But hot dogs are never mentioned.

So perhaps it’s no wonder that baseball does not enjoy the same popularity as football or basketball.

Apparently, they don’t care about things like Base Runners and Strikes.

They are just there for the food. And to be brutally honest, it looks like some of the players are as well…

P.S. The other two answers were Babe Ruth (how could I have missed that!) and Summer.