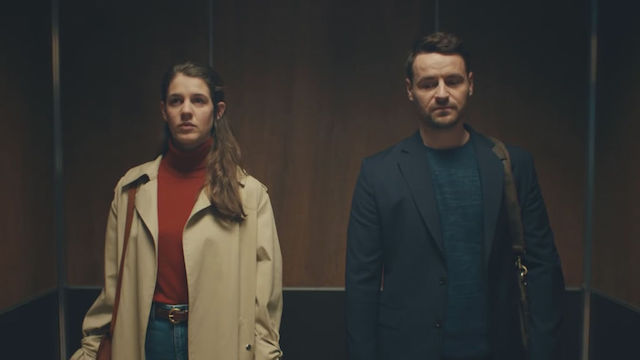 This is a great five-minute “film” from Bianco, a Danish shoe brand.

It was part of Bianco’s “Step Out of Your Head” campaign; here is a description of it from the campaign web site:

In this year’s campaign, we’re encouraging you to silence your worst critic, yourself. Most of us tend to let our thoughts run away with us, and let our insecurities take hold. But by giving our inner thoughts its time in the limelight, we might inspire a more positive way of thinking about ourselves.

In the film, we follow two people who’re on the verge of a romance. Only thing that’s holding them back is their thoughts. The reality they make for themselves between their ears have very little bearing in the actual world. Our message is simple: overthinking won’t get you closer to what you want.

In today’s society, we’re spoiled for choice and presented with thousands of possibilities every day. And in some way or another, we’ve all held ourselves back by overthinking. Be it from a new opportunity at work, family life, or a romance.

That’s why we’re encouraging you to “Step Out of Your Head.”

Who knows how much your life could change if you hush that little voice in your head?

I’ve never heard of Bianco before watching this video, and I would not have known that it was a footwear company based on watching it.

But apparently, Bianco is known for making such videos.

“At BIANCO, we’ve never shied away from talking about relevant social behavior or tendencies. That makes us a brave brand with a history of campaigns such as “Equal Pay is not Enough” and “Hate is so 2018.” But for this year’s campaign, we’re doing things a bit differently” says Maria Skau Madsen, head of marketing at BIANCO.

The film was created together with advertising agency & Co. and directed by Daniel Kragh-Jacobsen of RSA, and produced by Newland.

“The feeling of awkwardness present throughout the entire film – and the insight about overthinking – is something people can relate to. And we’re getting a lot of requests for a follow-up, which is a bit rare for an ad” concludes Lea Flodgaard from & Co.

And it’s not just viewers who liked the video, it won a silver Lion at this year’s Cannes Lions.

And I think that’s what makes for a memorable commercial, the story. It’s also hard to call it a commercial, sometimes, like this one, they are like mini-movies.

All I know is that I’m already looking forward to the next Bianco film campaign.

And that Bianco is a footwear company…