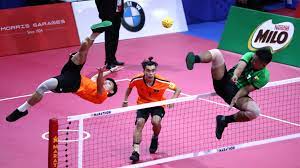 I was once again listening to sports talk radio the other day, and the hosts were discussing what could be done to save the Olympics. Viewership is way down, and it doesn’t seem to carry the same excitement that it did 20 years ago.

I think there are a few things that could be done, and one is to eliminate sports that perhaps should not be in the Olympics (sorry, artistic swimming) and perhaps look for new ones.

Well, I just discovered a sport that is entertaining to watch and looks like it requires incredible athletic skill.

Here is a description and other excerpts from Wikipedia:

Sepak Takraw is a team sport played with a rattan (synthetic plastic ball) between two teams of two to four players on a court resembling a badminton court. It shares similarities to volleyball and footvolley with its use of a rattan ball and allowing players to use only their feet, knees, shoulders, chest and head to touch the ball. At a first glance, Sepak Takraw appears to be a mixture of volleyball (since there is use of a net) and soccer (players use their feet).

In Myanmar, sepak takraw is known as “chinlone”. Chinlone has played a prominent role in Myanmar for about 1,500 years!

In the beginning, Sepak Takraw wasn’t meant to be a competitive game. Instead, it was a casual game with an emphasis on physical activity. The game acts as an exercise to improve dexterity and loosen the limbs after long periods of sitting, standing, or working.

International play is now governed by ISTAF, the International Sepak Takraw Federation. Major competitions for the sport such as the ISTAF SuperSeries, the ISTAF World Cup, and the King’s Cup World Championships are held every year.

Sepak takraw is now a regular sport event in the Asian Games and the Southeast Asian Games, with Thailand having won the most medals for the event.

It seems like it’s time to spread this game to the rest of the world.

Here’s a brief video clip of a game in action; the athleticism is incredible.

If the TV show Wide World of Sports were still on today, this is the sort of sport that it would feature. I miss that show…

85 thoughts on “This Sport Should Be in the Olympics”