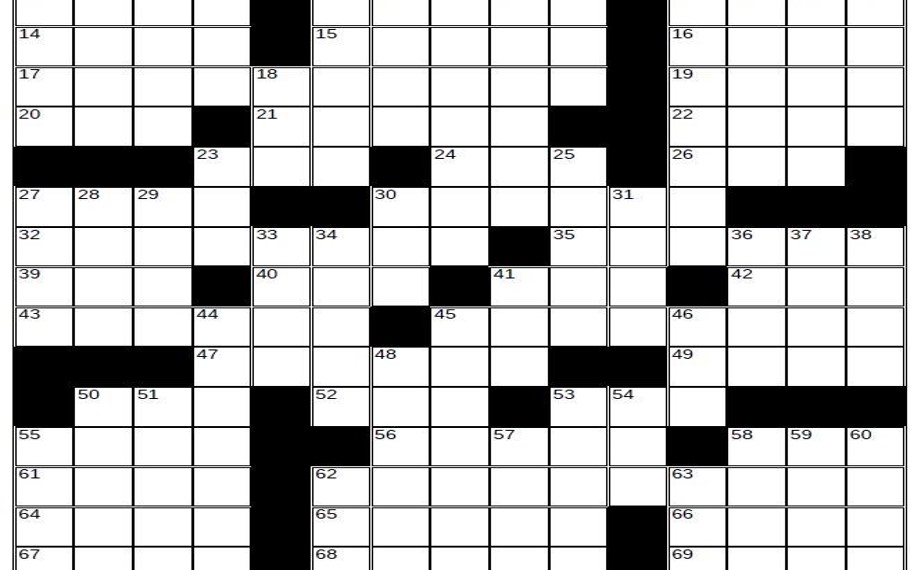 I guess it was Beth’s post from earlier today, cruciverbalist, that motivated me.

I was at my Aunt’s house for our usual Sunday morning of coffee and bagels, watching game shows, and reading the Philadelphia Inquirer. As part of the ritual, I also do the Sudoku puzzle and just glance at the crossword puzzles. The Inquirer has three crossword puzzles every Sunday, a TV crossword puzzle, the New York Times puzzle, and one from Newsday.

Like I said, perhaps it was Beth’s post that got me going, but today I looked a bit longer at the crossword puzzles. The TV one did not interest me, and I knew the NYT one was going to be too hard. So I decided to tackle the Newsday one.

Unlike other weeks, I made a good dent in this crossword puzzle while still at my Aunt’s house, so when it was time to leave, I decided to take it home with me.

After several hours of working on the puzzle in bits and pieces. I finally answered every clue. I will admit that in prior attempts of trying to solve such crossword puzzles, I often cheated by looking up some of the clues. But today, for whatever reason, there was no need for me to do so.

There were a few clues I did not know the answer to:

But fortunately, I had enough of the letters from having solved the clues around those, and combined with taking a guess here or there, I finished the puzzle.

When I finally found a place online to check my work, I discovered that I had answered two clues wrong, and one of them is quite embarrassing.

The clue for one of them was: “Have as a manager”. I had no idea what they were getting at, but I thought I had filled in all the other clues around it correctly, and came up with the answer “AESWERTO”. I knew it made no sense, but I just chalked it up to some quirky crossword clue.

As it turns out, there was one of the crossing clues (I don’t know if that is the right terminology) that I had answered incorrectly. And if my Mom knew I got this one wrong, she might have disowned me.

The clue was “Shannon’s land”. Now I know Shannon is in Ireland; I’ve been to the airport. The answer was four letters, and I had the first three filled in: ERI. I put an E at the end, because I knew that ERIE was the Irish name for Ireland. And that last E is what gave me the first E in the word AESWERTO.

Well, I learned that two wrongs do not always make a right. First, the Irish word for Ireland is EIRE, not ERIE. I knew that, but I guess I panicked.

And then when I looked up the answer, I felt ashamed to call myself an Irishman. The answer was ERIN. Of course it was; who doesn’t know that! And then by replacing that last E with an N in ERIN, that made the answer to the other clue “ANSWERTO”. I then saw the connection to the clue “Have as a manager”.

So I didn’t score a perfect score, but I came about as close as you can. And in hindsight, I missed one of the easiest clues in the puzzle.

I think moving forward, I may have discovered a new Sunday morning ritual.

And who knows, someday I may even give the NYT crossword puzzle a shot…

74 thoughts on “I Completed My First Newspaper Crossword Puzzle! (Not Correctly Though)”