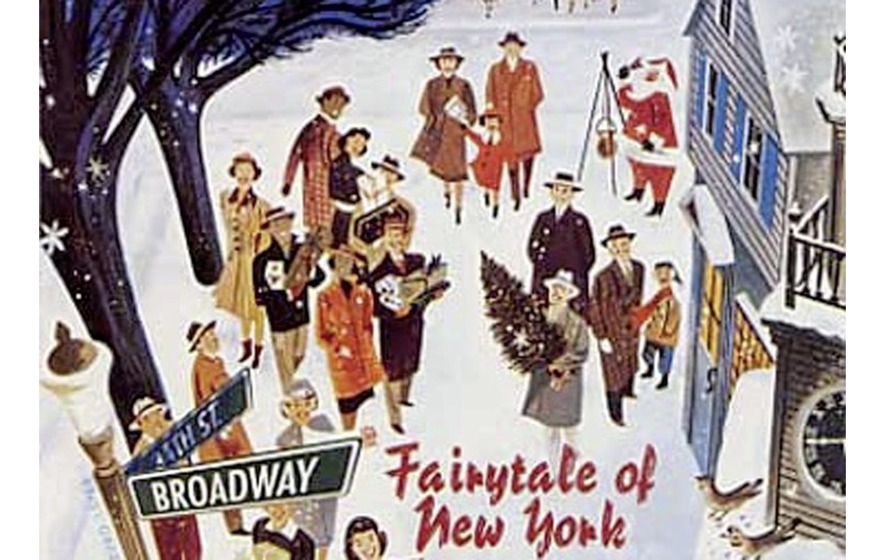 Since it is now officially the season of Advent, I feel OK with sharing some of my favorite Christmas songs.

And as a way for making up for not getting a crossword puzzle clue that had the answer of ERIN, I thought I would begin with an Irish tune by the Pogues, Fairytale of New York.

Here’s a little background on The Pogues, courtesy of Wikipedia:

The Pogues were an English or Anglo-Irish Celtic punk band fronted by Shane MacGowan and others, founded in Kings Cross, London in 1982, as “Pogue Mahone” – the anglicisation of the Irish Gaelic póg mo thóin, meaning “kiss my arse”. The band reached international prominence in the 1980s and early 1990s, recording several hit albums and singles. MacGowan left the band in 1991 owing to drinking problems, but the band continued – first with Joe Strummer and then with Spider Stacy on vocals – before breaking up in 1996. The Pogues re-formed in late 2001, and played regularly across the UK and Ireland and on the US East Coast, until dissolving again in 2014. The group did not record any new material during this second incarnation. Their politically tinged music was informed by MacGowan and Stacy’s punk backgrounds, yet used traditional Irish instruments such as the tin whistle, banjo, cittern, mandolin and accordion.

And here is some background on the song, also from WIkipedia:

“Fairytale of New York” is a song written by Jem Finer and Shane MacGowan and recorded by their London-based band the Pogues, featuring singer-songwriter Kirsty MacColl on vocals. The song is an Irish folk-style ballad and was written as a duet, with the Pogues’ singer MacGowan taking the role of the male character and MacColl the female character. It was originally released as a single on 23 November 1987 and later featured on the Pogues’ 1988 album If I Should Fall from Grace with God.

Originally begun in 1985, the song had a troubled two-year development history, undergoing rewrites and aborted attempts at recording, and losing its original female vocalist along the way, before finally being completed in August 1987. Although the single has never been the UK Christmas number one, being kept at number two on its original release in 1987 by the Pet Shop Boys’ cover of “Always on My Mind”, it has proved enduringly popular with both music critics and the public: to date the song has reached the UK Top 20 on 17 separate occasions since its original release in 1987, including every year at Christmas since 2005. As of September 2017 it had sold 1,217,112 copies in the UK, with an additional 249,626 streaming equivalent sales, for a total of 1,466,738 combined sales. In December 2020, the song was certified quadruple platinum in the UK for 2,400,000 combined sales.

In the UK, “Fairytale of New York” is the most-played Christmas song of the 21st century. It is frequently cited as the best Christmas song of all time in various television, radio, and magazine-related polls in the UK and Ireland, including the UK television special on ITV in December 2012 where it was voted The Nation’s Favourite Christmas Song.

Here is one critic’s review of the song (from the same Wikipedia article):

In careening wildly through a gamut of moods from maudlin to euphoric, sentimental to profane, mud-slinging to sincerely devoted in the space of four glorious minutes – it’s seemed perfectly suited to Christmas – a time which highlights the disparity between the haves and have nots around the world. Those of us lucky enough to spend the day with friends and families by a cosy fire with a full stomach think of the lonely, the homeless and the hungry. As MacColl and MacGowan’s dialogue descends from the ecstasy of their first kiss into an increasingly vitriolic argument their words puts the average family’s seasonal bickering into perspective. “You’re a bum you’re a punk/ You’re an old slut on junk…” The song’s row ends with an expression of love and hope (against all the odds) as MacGowan’s character promises MacColl’s that, far from wrecking her dreams he has kept them with his own “Can’t make it all alone,” he pleads, “I’ve built my dreams around you.”

The YouTube video shared above has been viewed over 78 million times. The lyrics of the song have also met with their share of protests over the years, as described in the Wikipedia article referenced above.

All in all, it seems a worthy song to start off the Christmas music season…

50 thoughts on “Music Monday: Starting the Christmas Music Season with an Irish Connection”