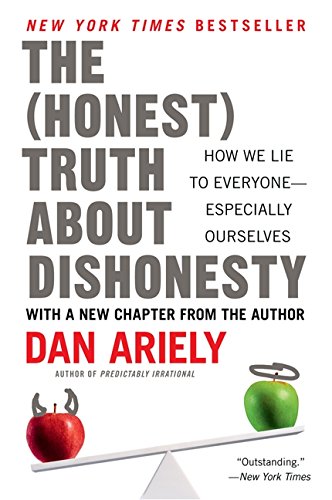 Many readers of this blog will recognize the name, Dan Ariely.

Dan is a world-renowned behavioral economist at Duke University and the best-selling author of several books on decision making. He also writes a biweekly column for the Wall Street Journal in which he answers readers’ questions. That column has been a frequent source of blog posts for me, likely totaling over 100 posts over the years.

But now Dan is in some hot water. A landmark study from 2012 in which Dan and his team found that people would be less likely to cheat and lie if they signed an honesty declaration at the top of a form before answering questions, is now being called into question regarding the data used for the study.

The 2012 study was eventually retracted by the Proceedings of the National Academy of Sciences after academics on the Data Colada research blog tried recreating the experiments in the study, only to find that there was no reduction in cheating and lying and that the main experiment was faked ‘beyond any shadow of a doubt.’

The study had been used by government agencies around the world, including the IRS, who chose to include an honesty declaration at the top of their forms and credited the method with helping to collect an additional $1.6 million from government vendors in the summer of 2015.

The study’s co-author, Max Bazerman, a professor of business administration at Harvard Business School, said he had raised concerns about inconsistent data during the original study, but Ariely allegedly assured him and everyone else working on the study that the odd findings were correct.

The three other authors who worked on the study expressed similar concerns and said they played no part in collecting the data, which all went through Ariely.

Ariely confirmed that he alone was in touch with the insurance company that ran the test with its customers and alleged that the unnamed insurance company was responsible for the fake data, BuzzFeed News reports.

Aaron Charlton, a marketing professor at Illinois State University who went over the study, claimed Ariely’s statement that the insurance company was at fault did not make any sense. ‘Why on earth would an insurance company fabricate data in such a way as to support Dan Ariely’s hypothesis,’ Charlton wrote on his website.

Duke’s Office of Research Integrity is examining the allegations. Ariely notes that he “fully supports this effort and am grateful for their guidance in developing appropriate regulatory oversight, data management and document retention procedures for the future.”

I certainly hope that there is a reasonable explanation for the data issue. To think that Dan fabricated data would be crushing to me, since I’ve always been a big fan of his work.

I hope that it does not turn out to be ironic that one of Dan’s books is titled: The (Honest) Truth about Dishonesty, with an even more ironic subtite: How We Lie to Everyone—Especially Ourselves

I just hope that if more of his research is found to be problematic that it doesn’t impact my blogging streak. Would I have to retract all those posts that featured his research? Would that end my streak?

As usual, I’m only able to think of things in terms of how it affects me…