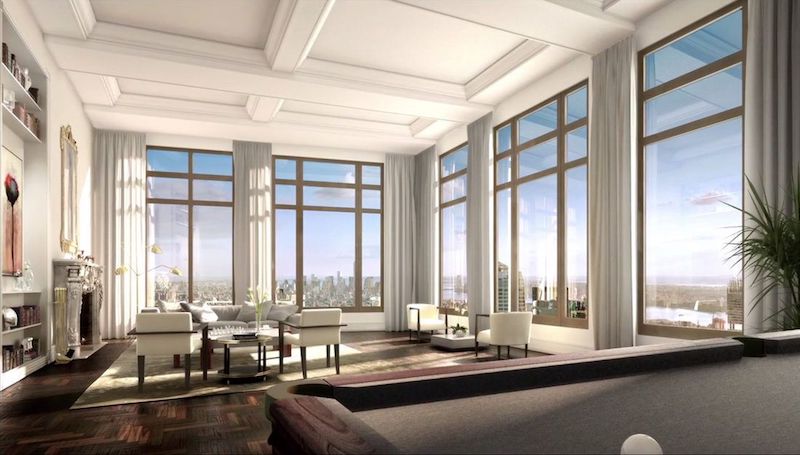 Pied-à-Terre: a small apartment, house, or room kept for occasional use; from the French, literally, “foot to earth”.

In New York City real estate, a pied-à-terre is an apartment to be used on weekends or short periods as a vacation home or a “non-primary residence.” Such a place provides access to the city on weekends for theater, museums, and restaurants for those whose primary residence is outside the city. It may also offer a way to be closer to a child who could be attending college in the city.

I’ve always liked the word, pied-à-terre, as well as the idea of having one. And I’ve also always associated the word “small” with such a place.

Well, I guess “small” truly is a relative term.

Mr. Och recently relocated to South Florida to save on taxes and plans for the New York City home to be a pied-a-terre, according to people familiar with the matter.

And what does he get for $95 million?

A brand new four-bedroom apartment that is about 9,800 square feet.

You read that correctly; not 980 square feet, which would seem to be the right size for a pied-à-terre, but 9,800 square feet. That’s more than four times the size of my house, and I’ve never thought of myself as living in a pied-à-terre. But apparently I’m living in something that’s even smaller than that. Can you imagine what his place in Florida must be like?

In addition to the penthouse, Mr. Och also gets a smaller apartment on a lower floor, as well as condo amenities such as private dining rooms, an athletic club, a juice bar, a library, a basketball court, a golf simulator, and a children’s play area.

That’s quite the pied-à-terre.

I just don’t think it’s what the French had in mind.

All of this is just further proof that the rich are indeed different than the rest of us.