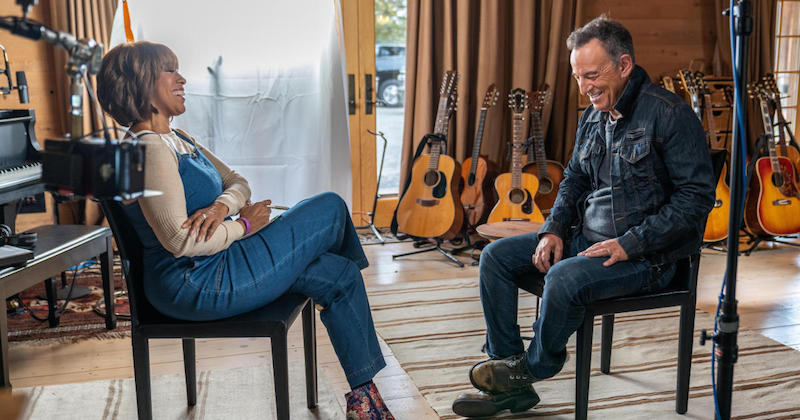 After five years of trying, Gayle King was finally able to land an interview with Springsteen, and as a viewer, it was worth the wait.

The interview was originally split into a couple of parts. Below are parts one and two. (I’ve also included the full interview at the end if you’d prefer to watch that. There are slight differences between the videos as a result of editing.)

And here is part two:

Here’s a little behind the scenes clip:

One interesting part of the interview was Springsteen’s comments about his voice and the importance of writing:

“Yeah, I never cared for my voice … I still don’t listen to it. It always sounds like I’m just waking up or something. I don’t know. That’s why I have to write. I have to write or else I’m sunk.”

Springsteen also notes how lucky he has been to have worked with his friends for the past 50 plus years, a rare opportunity. He also notes now blessed he is to have been married to his wife for the past 30 years.

Springsteen fan or not, I recommend watching the interview, if for nothing else to get a look at his farm.

And here’s the trailer to his movie, Western Stars, which he calls a love letter to his wife:

12 thoughts on “A Wonderful Interview with Bruce Springsteen”