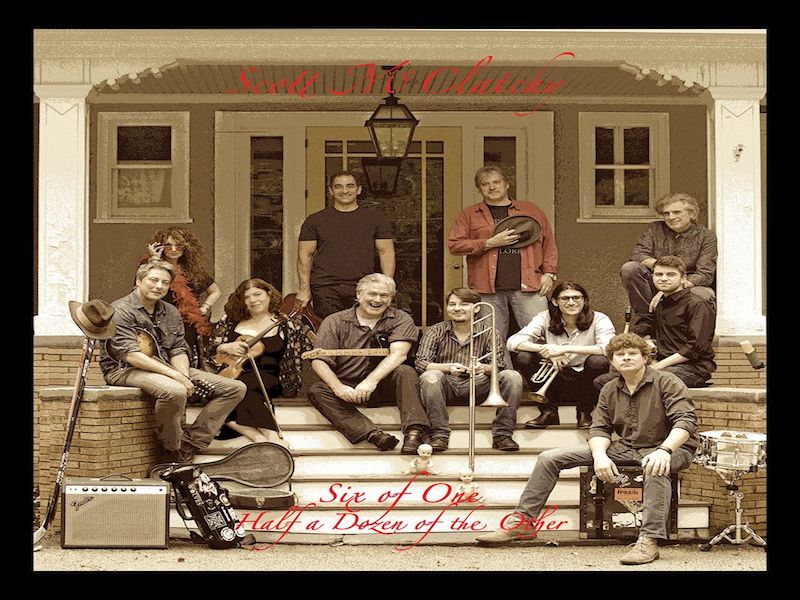 Back on March 15, local musician Scott McClatchy started his “Mission To Civilize Internet Guitar Pull” on his Facebook page.

A guitar pull is a southern tradition where a small group of musicians sit around and take turns playing songs on a guitar.

Scott started the tradition as a way to bring music to people during the covid-19 crisis, and as a way to support musicians, and others, whose livelihood has been affected by the crisis.

Scott is now up to day 23 of his Mission To Civilize Guitar Pull, and it has been wonderful listening to him perform a new song every morning. He performs a mix of both original songs as well as some covers. But as Scott points out, his covers are not of greatest hits, but often the B-side, deep cuts of an artist. To date, he has played songs of Springsteen, John Fogerty, John Prine, John Hiatt, Tom Waits, Steve Earle, Steve Van Zandt, Simon and Garfunkel, and even an old Irish Rebel song on St. Patty’s Day.

Here are a couple of my favorites:

an original: Toasting My Friends:

cover of Bruce Springsteen’s Tougher Than the Rest

And to give you a little bit more of Scott’s music, here is the music video for one of his more popular songs, Take a Walk with Me:

The song was even chosen to close out one of the episodes of the TV show Rizzoli and Isles, sung by the actor Bruce McGill:

I much prefer Scott’s version…

Here’s a brief background on Scott, from his web site:

Scott McClatchy started out as the singer/songwriter/guitarist for Philadelphia’s The Stand.  McClatchy guided The Stand through a successful run that included being named Best Unsigned Band by both East Coast Rocker magazine & WMMR Radio.  McClatchy’s music blurs the lines between all styles of American music. Rock, folk and country are all touchstones of his song writing. McClatchy and his band have worked nationally with acts as varied as Steve Earle, John Hiatt, Confederate Railroad, The BoDeans and Little Steven. McClatchy also performed acoustically with artists like T-Bone Burnette and Corey Glover (Living Colour). McClatchy left his native Philadelphia for New York City to join forces with Scott Kempner and Manny Caiati of The Del Lords.  In 2000, McClatchy and Kempner paired up as artist and producer on McClatchy’s debut CD: “Blue Moon Revisited”.  With follow up CDs; “Redemption” & “Burn This.”  McClatchy then partnered up with Nashville songwriter & producer, Billy Lee, and released his 4th CD; “A Dark Rage.”  Scott McClatchy and Billy Lee have also co-written songs for the Nashville market.  McClatchy has just released his latest album, with a 10 piece band that will include a full-blown horn section.

McClatchy has toured extensively.  He has traveled as guitar player for Hall of Fame member, Dion [“Runaround Sue”] and with Dave Kincaid’s [of The Brandos]  “The Irish Volunteer” show.  Three of Scott’s songs can be heard on the soundtrack of the independent film, God, Sex & Apple Pie, which won the Award For Best Picture at the 30th Parallel Film Festival.

Besides his musical talents, there are a couple of other things that make me a fan of Scott’s:

I encourage you to give Scott a listen; you can find his “Mission To Civilize Guitar Pull” on his Facebook page.

Thank you, Scott, for your efforts to keep us entertained during this crisis and your support of other artists and non-profits.

While I do hope for a speedy end to the covid-19 crisis, one downside will be the end of your performances…

Stay safe, and thank you to all the helpers out there…

17 thoughts on “Music Monday: Local Artist Doing His Part To Get Us Through Covid-19”