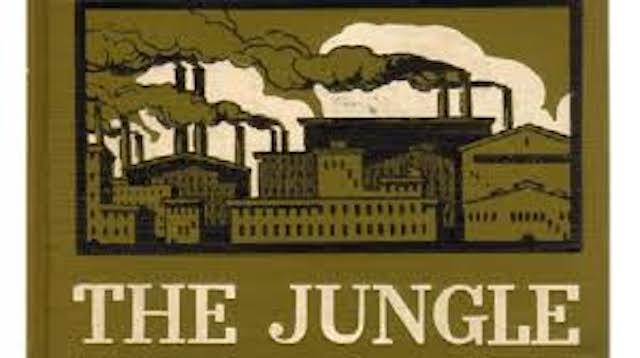 I just finished reading The Jungle by Upton Sinclair, and to sum it up in one word, wow.

Many people may have read The Jungle in high school; it seems to be a popular choice on school reading lists. Somehow, I got out of school without ever having read it.

But I’m glad I read it when I did, I’m not sure it would have been as impactful if I had read it as a teenager.

Here’s some info about the book from Wikipedia:

The Jungle is a 1906 novel by the American journalist and novelist Upton Sinclair. Sinclair spent seven weeks gathering information while working incognito in the meatpacking plants of the Chicago stockyards for the socialist newspaper, Appeal to Reason. Sinclair wrote the novel to portray the harsh conditions and exploited lives of immigrants in the United States in Chicago and similar industrialized cities. His primary purpose in describing the meat industry and its working conditions was to advance socialism in the United States. However, most readers were more concerned with several passages exposing health violations and unsanitary practices in the American meatpacking industry during the early 20th century, which greatly contributed to a public outcry which led to reforms including the Meat Inspection Act. Sinclair famously said of the public reaction, “I aimed at the public’s heart, and by accident, I hit it in the stomach.” The book depicts working-class poverty, the lack of social supports, harsh and unpleasant living and working conditions, and a hopelessness among many workers. These elements are contrasted with the deeply rooted corruption of people in power.

I can certainly see why there was such public outcry; the descriptions of the work that takes place inside of the meatpacking plants were, to put it mildly, disgusting. How anyone who worked at these plants, whether labor or management, could eat the output of these facilities, is beyond me.

Beyond the disgusting description of the meatpacking process, the book highlights the impact of such work on the laborers. No one was immune to injuries, diseases, and other health problems. But in addition to these physical ailments, the stress of the job and the low wages took an emotional and spiritual toll on the workers and their families. There was never enough money, food, or clothing, and eventually, people simply lost hope.

Here s one passage that gives you a sense of what it may have been like to work in such a situation:

“You would begin talking to some poor devil who had worked in one shop for the last thirty years, and had never been able to save a penny; who left home every morning at six o’clock, to go and tend a machine, and come back at night too tired to take his clothes off; who had never had a week’s vacation in his life, had never traveled, never had an adventure, never learned anything, never hoped anything…”

Quite disheartening, and that passage doesn’t even include any of the graphic images of what the work was actually like.

It’s certainly not the type of job any of us would want, so why would it be acceptable for anyone to do it?

As I read through the book, it made me realize how lucky I am to have the job I have, and the life that I have.

It also made me realize that words matter.

While Sinclair may not have been overly successful in pushing his Socialist agenda, the book did lead to legislation that improved the working conditions within the meatpacking industry.

Isn’t that something we would all like to be able to say, that what we do makes a difference?

We all owe Sinclair a debt of gratitude for his work on The Jungle in terms of the Meat Inspection Act.

But also for making us realize that one person can make a difference.

28 thoughts on “I’ll Never Complain about My Job, or My Life, Again”