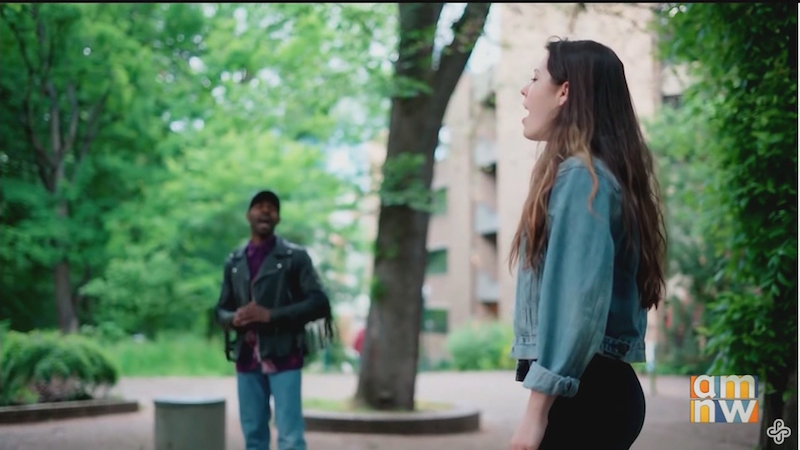 There is something special about listening to two voices blend together in harmony, becoming something greater than the sum of their parts.

The past couple of weeks I have come across two wonderful duets. What makes them extra special is that they were impromptu performances; in both cases, neither singer knew each other before they performed their duet.

The first duet comes courtesy of Carol Taylor who posts at the wonderful blog, CarolCooks.

The young woman in the video is Allie Sherlock, an Irish singer, songwriter, guitarist, and busker. She has performed frequently on Grafton Street, Dublin. A video of her performing a cover of Ed Sheeran’s Supermarket Flowers went viral on YouTube in June 2017. In early 2018, Sherlock performed the song Million Years Ago by Adele on ABC’s The Ellen DeGeneres Show, and Perfect by Ed Sheeran on RTÉ One’s The Ray D’Arcy Show. Later in 2018, Sherlock signed a five-year contract with Patriot Records, owned by One Republic lead vocalist Ryan Tedder.

I wish Allie continued success; she has a beautiful voice, and I love that she shares her gifts singing to people on the streets of Dublin.

The second duet I came across was courtesy of ABC World News Tonight, where it was one of the show’s closing “good news” segments.

The video starts off featuring Portland State graduating senior Madisen Hallberg being filmed singing the national anthem on campus for her university’s virtual graduation. She then heard the beautiful voice of a stranger suddenly start singing along.

A man, later identified as Emmanuel Henreid, had been passing by Hallberg as she warmed up when he asked the team shooting video of her if he could join. Henreid, who goes by Onry, is a trained opera singer. He spends a lot of time working with other musicians and artists, which has been difficult to do during the quarantine. He missed collaborating with people, and this seemed like an opportunity to do just that.

Onry said musicians help show the public how to live and play in harmony through collaboration.

These two videos are proof of the power of music to bring people together.

36 thoughts on “Music Monday: A Remarkable Pair of Duets”