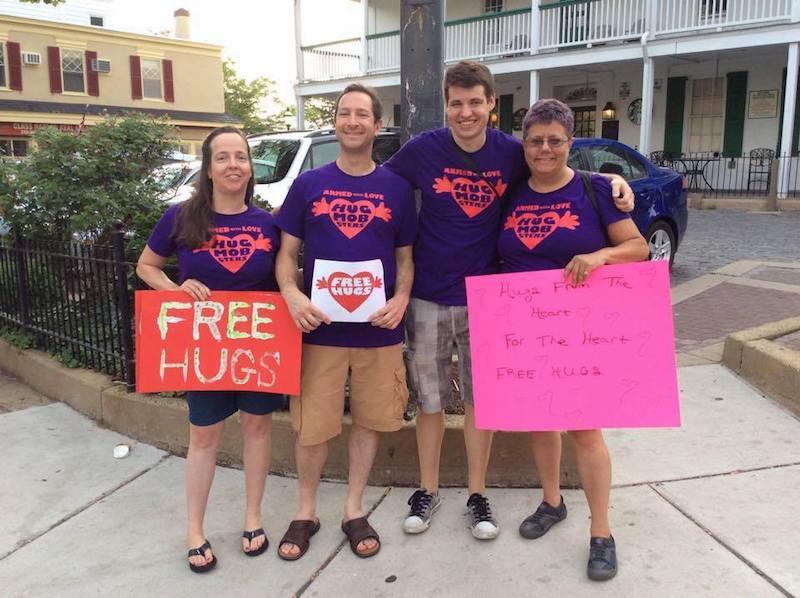 This past weekend I was lucky to catch a local radio show, Flashpoint, while driving in my car. The show is hosted by Cherri Gregg and features debates on hot topics in the news and newsmaker interviews.

The story that caught my attention was the segment, “Change Maker of the week“.

This week’s Change Maker was Edie Weinstein, a minister, social worker, and founder of Hug Mobsters Armed with Love. . Weinstein uses hugs to build human connections. Here is her story from the organization’s Facebook page:

Hugs heal. They bring people together, heart to heart. They offer a sense of belonging. They are portable. They are equal opportunity and the perfect gift for people of any age, size, or ability. They are the gift that you want to return. In 2014, I gathered together a group of friends for A Valentines’ Day FREE Hugs Flash Mob at 30th Street Station in Philadelphia, which is the City of Brotherly Love (and I like to add And Sisterly Affection) In a two hour period, we hugged countless people as they made their way through this ‘way station’ and made our day as a result. I began referring to my friends and me as ‘Hug Mobsters armed with love’. It had a certain ring to it. Valentines’ Day 2015 in honor of Heart Month, I organized another event; this time it was a stroll through Doylestown, PA at a more leisurely pace. A blizzard kicked in, but we kept on hugging. The next one was on June 12, 2015, in celebration of my one-year cardio-versary. I had a heart attack on June 12, 2014, so I was offering hugs from the heart, for the heart. My vision is that people take it on the road in their hometowns to bridge the gaps that occur between people and create a more peaceful and loving world.

As part of the Flashpoint interview, Weinstein noted that the skin is our biggest organ, and like any organ, it needs proper care. She mentioned something known as “skin hunger”, a term I had not heard before. She points out that just like babies who do not get enough nurturing touch fail to thrive, the same is true with adults. Weinstein believes that depression thrives on isolation, and hugs can help combat that feeling of isolation.

Weinstein mentioned a visit she made to a V.A. Hospital, where she gave not only hugs but a workshop as well. Afterward, some of the men told her that it was the first time in 20 years that someone had touched them in a loving, nurturing way.

In a post on Psychology Today about skin hunger and the power of hugs, Suzanne Degges-White notes that touch is considered the first of the five senses we acquire. Just as seeing a beautiful sunset can move a person to inexplicable tears, or hearing beautiful music can reach into one’s soul, being wrapped in the warm embrace of someone you trust can fulfill a wide range of emotional and physical needs you might not have even realized you had.

Degges-White goes on to state that tactile stimulation and close contact with others is necessary to our well-being. Yet as we get older, there may be fewer and fewer opportunities to satisfy our hunger for the touch of another human being. In fact, some geriatric care centers have begun programs in which hugs are provided on a regular basis to make sure skin hunger does not go unsatisfied.

Degges-White notes that we are calmed by the comforting touch of another. An embrace before facing common stress triggers can protect against increased heart rates. It’s been shown, too, that the effects of a hug can last longer than just the moment or two immediately after it occurs; one researcher suggested that a warm hug between romantic partners every morning can have a positive effect that lasts the full day. Hugs have also been shown to increase the production of oxytocin in humans; this is the hormone that positively influences our bonding and nurturing behaviors.

Getting a warm hug of support from someone we trust in a moment of stress can instantly calm us; being the one giving a hug to someone who needs one can also bring you a surge of well-being. Humans need physical contact, and we all experience skin hunger that needs satisfying—whether you are cuddling a tiny infant or gently embracing your great-grandmother, you are providing a little bit of comfort, stress reduction, and healing.

I’ve always thought of exercise as the magic pill that has multiple benefits; it looks like I may need to add a second pill to my daily routine – giving hugs. Such a pill seems to have multiple benefits as well and seems like it would be a lot easier to swallow than the exercise pill.