It was my sixth attempt; the previous five had all resulted in a “thanks, but no thanks” decision.

Maybe today would be my turn, I would be one of the chosen few.

I really wanted to do this, but alas, it was not meant to be.

Even though I’ve been summoned multiple times, I’ve never had the chance to serve on a jury. And it’s something I really want to do, at least once. Just to see what it’s like.

So I was hoping that today would be my lucky day.

I arrived at the juror’s waiting room about 8:20, ten minutes before the requested time. There were already close to 150-200 people there – my competition. Nothing really happened until about 9:20 when they began showing us a series of videos. By this time, there were probably about 300 potential jurors in the room. Fortunately, I had brought a good book to read, so the time had passed pleasantly enough.

The final video was of a local judge stepping us through how to complete the questionnaire. I guess this was designed to prevent the sort of problems that Sebastian Maniscalco encountered when he had jury duty.

For the most part, everything was going smoothly, except for the attitude of the woman in front of me. When she first arrived and sat down in her chair, she looked around and asked, to no one in general, “Does anyone know how this bullshit works?”

I made sure to avoid eye contact; I was not about to engage with her. But to my surprise, the guy next to me calmly explained how the process worked. The woman continued to complain, again to no one in particular, about how ridiculous the whole thing was and what a waste of time. At one point, she mentioned the lousy pay of $9 for the day, proclaiming that she could make quadruple that. I also heard her tell the guy next to her that she didn’t believe in incarceration, except in the most extreme cases.

Anyway, we completed our questionnaires and were told we had a 45-minute recess. At this point, it was just a couple of minutes past 10:00 am. Most people opted to leave the room, including the woman in front of me. I heard her ask the guy next to her if there were any bars close by, saying she wouldn’t “get mangled or anything like that.”

I just stayed in the room, reading my book.

When we reconvened 45 minutes later, the woman in charge announced that she had some good news; we were all being dismissed. There was no need for our service today.

I may have been the only person in the room disappointed with such news. I didn’t even get the chance to go to a courtroom this time.

So it looks like I’ll have to wait at least another year in my attempt to serve on a jury.

But at least I got this cool certificate… 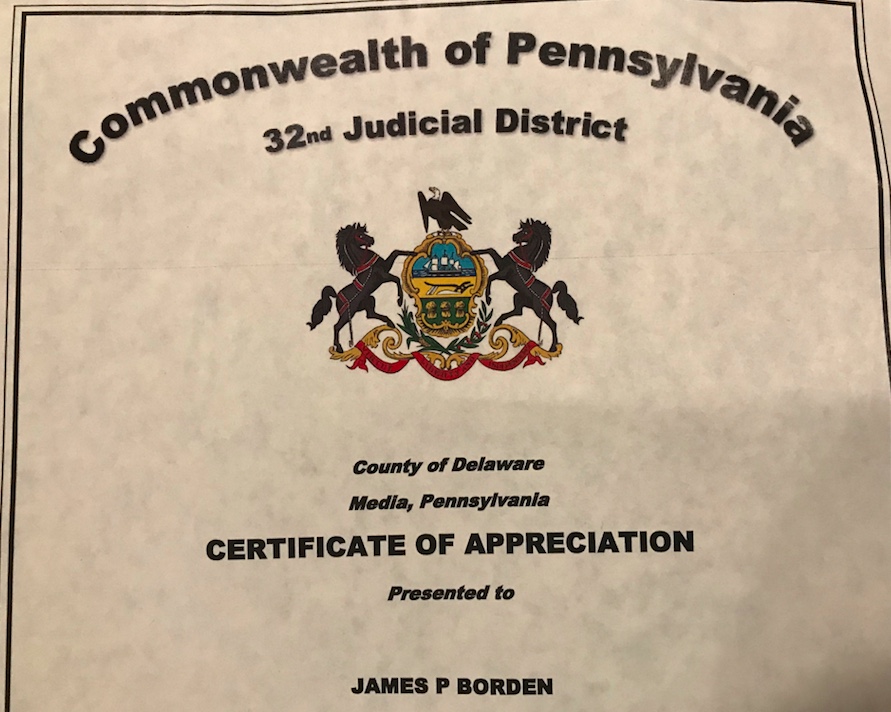