I think at this point the statute of limitations has expired.

So it’s time to come clean.

When I was about 18 years old a friend and I went to Zern’s Farmers Market in Gilbertsville, PA just for something to do one Saturday night.

As we were walking past the record store, I caught a glimpse of a poster of Olivia Newtown-John (shown above), hanging on one of the walls of the store. As soon as I saw it, I had to have it. To say I had a crush on Olivia would be an understatement; I was convinced that her song “I Honestly Love You” was written with me in mind.

Anyway, I asked one of the people working at the store if the poster was for sale, and he said no, it was a promotional poster from the record company. I then asked if he could just give it to me, and he said no once again.

So I left the store somewhat depressed but then as we walked around the rest of the farmers market, my friend and I began to hatch a plan. We would go back to the store and he would distract the store clerk and I would grab the poster off the wall and just start running through the farmers market to the car.

Surprisingly, everything worked according to plan, and a couple of months later the poster was hanging on my dorm room wall.

I can’t imagine what the people walking around the flea market must have thought to see some nerdy guy running through the flea market with a big Olivia Newton-John poster in his hand, and a big grin on his face.

I was out driving today and I heard something on the radio that today was the final day for Zern’s Flea Market; it would be closing for good after more than nearly 100 years of being in operation.

My first thought was that I had to return to the scene of the crime, and at least using my inside voice, apologize for my wrongdoing.

So I took my wife and son with me, and off we went to Gilbertsville. It’s been more than 40 years since I had been there, but it looked vaguely familiar. There were a couple of stores that sold used records, but I have no idea if one of them was the same store that once had the Olivia poster. Nonetheless, I took the following picture of a fairly empty wall that may at one time have had the poster on it:

We walked around the market for about 40 minutes, and then it was time to say goodbye and to take the picture of the entrance way as a reminder of my youthful indiscretion: 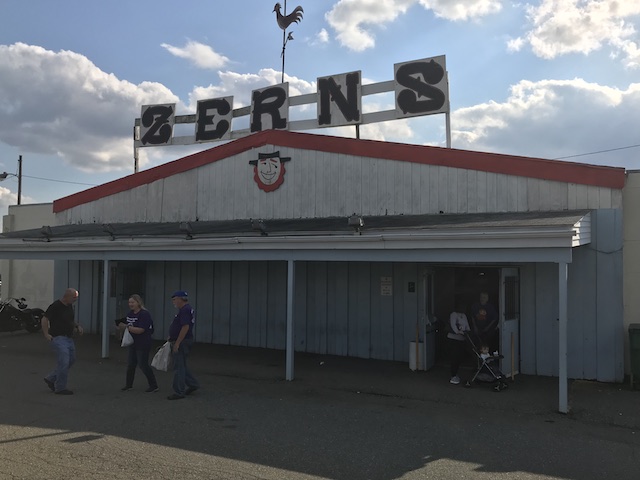 Steve Jobs’ noted in his Stanford commencement speech that he could have never predicted that taking a course in calligraphy at Reed College would one day provide the inspiration for the fonts for the Macintosh.

And so that’s how I feel. Who knew that stealing an Olivia Newtown-John poster from a flea market would one day lead to me writing a blog post about it, nearly 45 years later.

Thanks for the memory, Zerns.

And as to the poster, my wife made me get rid of when we got married…

P.S. I wish Olivia the best in her most recent battle with cancer…