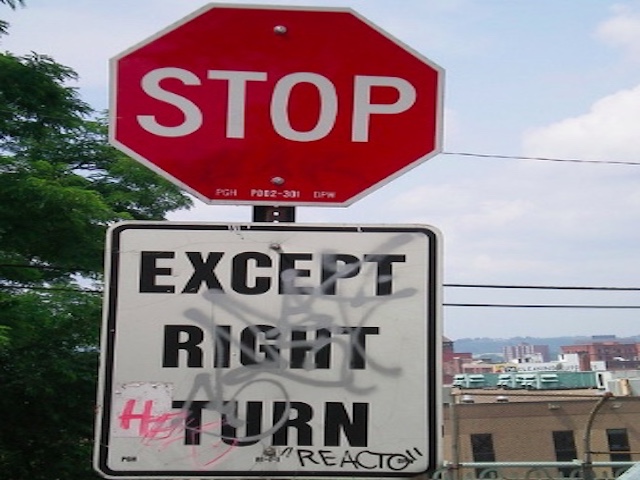 As I’ve gotten older, crankier, and hopefully a bit wiser, these stop signs have gotten more and more annoying.

Imagine coming to an intersection where you want to make a left turn, and you have a stop sign. There is a car coming in the opposite direction, and you notice that they also have a stop sign. Since you got to the intersection first, you assume you have the right-of-way. However, the car on the other side of the intersection is making a right turn, and unbeknownst to you, they don’t have just a simple stop sign, as you assumed. They’ve got one of the worst traffic signs ever created, the one shown above.

So naturally, they just keep moving, trying to go the same place you are going. This is not a good situation.

The other scenario is that you come to an intersection with a stop sign, where you are planning to continue straight ahead. A car is arriving on your right side of the intersection, but you got there first. So after stopping, you proceed to go straight. However, once again, that driver on your right has the ridiculous stop sign that doesn’t always mean stop sign, so they keep going. Another potentially dangerous situation.

Most, and hopefully all, drivers in the U.S. know what the Stop sign looks like, even from the back or the side. And they know what it means.

But who knows about these “Except Right Turn” signs?

As it turns out, perhaps only Pennsylvania drivers (and maybe Oregon and Connecticut, from my limited research), since that is the only state that has such a sign. So yes, perhaps if you drive in PA and are familiar with such signs, you might know to look for it when you approach such a situation.

But what if you are an out of state driver, or are from PA, but have never seen such a sign?

But as you can see with the two scenarios above, such a move could lead to an accident.

So why would PA have such a sign? I’m guessing it is to help with traffic flow, but I would think (and hope) that safety should come before traffic flow, and this sign does not promote traffic safety.

I thought perhaps it was just me, but a quick search of the web a few minutes ago showed me that I am not alone.

from the labor law talk forum:

I have not gotten in an accident but today I almost did. I was making a left turn at a 3 way stop. One of the sides has an “Except right turn” sign underneath it, which is not visible from the opposite side. I waited for a car to turn and then I began my turn. Another car was speeding out and made the right turn, nearly hitting me. As they honked their horn I thought “You’d be at fault.” but would they?

Here are a couple of responses to that post:

from the Kawasaki motorcycle forum:

I have learned that Pennsylvania likes to put a small sign below a STOP sign that says “except for right turns.” When I first moved here 16 years ago I stopped at a sign (I was in a cage) and noticed the driver coming from the right also had a Stop sign. I pulled out going straight and the next thing I know it’s on my a$$ and horn blaring. They were only slowing to make a right turn through the Stop sign.

This is the post that made me realize that PA is the only state, or perhaps just one of a small number, that utilizes such a sign. Here were a couple of responses to this post:

In Pennsylvania, when is it safe to turn right at a stop sign?

with the following comments:

But fortunately, this is the type of problem that has an easy solution.

Just get rid of this type of Stop sign, and just make it a good old regular stop sign that everyone knows and loves.

If not, in my book, it’s just one more reason to leave Pennsylvania.

By the way, one of my cousins is a traffic engineer ( a job that sounds awesome to me); hopefully, she reads this and offers her opinion.

8 thoughts on “Where Does Stop Not Mean Stop? In Pennsylvania, Apparently.”