I’ve previously written about the potential beauty and simplicity (and challenge) of writing a six-word story, and today I discovered, thanks to WordPress Discover, a fun, but challenging twist to the genre – the five random emojis story.

Friends James Hannaham and John W. Bateman created a game where one of them texts five random emoji to the other, and the recipient then creates a micro-story. 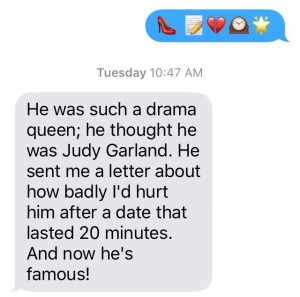 So I thought to myself, in honor of World Emoji Day, I can do that. I later asked my wife and son to send me a text message with five random emojis. Here is what my son sent me:

I stared at those symbols for a long time and realized this is harder than I thought.

Here’s the best story I could come up with.

After I learned my ABCs and the teacher gave me her approval, she thought I would be up for the challenge of writing an entire letter. I told her to give it some time, I’m only in kindergarten.

My wife sent me the following five emojis:

Once again, it was difficult to come up with a story, but here we go:

He was up for the challenge. He would swim across the Atlantic; she would fly. Fueled only by bananas, he finally made it to England, where they lived happily ever after.

I’m not sure how much time the two friends, James and John, spend on this game, but if they are anything like me, there’s probably a lot of headbanging on one side of the message, and a lot of evil grinning on the other.

I’ll leave you with the following:

That’s how I feel, now that I’ve finished this blog.

16 thoughts on “Forget about the Six-Word Story, How about the Five Emoji Story?”