First, let me explain the link between all the cars in the photo above and the title of the post.

This past weekend was move in day at Villanova for all non-freshmen (the freshmen came a few days earlier for orientation). I enjoy taking in all of the activity and excitement that surrounds move-in day, as shown in the photo. It’s a way to get myself psyched up for the new semester (one observation – doesn’t anyone drive a sedan any more?)

What it also means is that it’s time for me to get back to teaching.

As part of getting ready for my first class (an Intro to Business course), I like to highlight the global nature of business, the impact of business on quality of life, and how the U.S. compares to other countries on a few metrics.

So I thought I’d share a couple of the rankings that I plan to show my students this week. I’ve talked about these rankings before, but it’s been a while, so here are the latest.

“… rankings are based on how global perceptions define countries in terms of a number of qualitative characteristics, impressions that have the potential to drive trade, travel and investment and directly affect national economies. The report covers perceptions of 80 nations. The study and model used to score and rank countries were developed by Y&R’s BAV Group and The Wharton School of the University of Pennsylvania, specifically professor David J. Reibstein, in consultation with U.S. News & World Report. A set of 65 country attributes – terms that can be used to describe a country and that are also relevant to the success of a modern nation – were identified. Attributes by nation were presented in a survey of more than 21,000 people from across the globe. Participants assessed how closely they associated an attribute with a nation. Each country was scored on each of the 65 country attributes based on a collection of individual survey responses. The more a country was perceived to exemplify a certain characteristic in relation to the average, the higher that country’s attribute score and vice versa. These scores were normalized to account for outliers and transformed into a scale that could be compared across the board. Attributes were grouped into nine subrankings that rolled into the Best Countries ranking: Adventure, Citizenship, Cultural Influence, Entrepreneurship, Heritage, Movers, Open for Business, Power and Quality of Life.”

I’m guessing few of you care about the methodology, so let’s get to the rankings. Here are the top 10, based on overall rank, as well as the rank across the individual categories for these 10 countries:

As you can see, the U.S. was ranked eighth overall, with its strongest rank in the Power category, coming in at number one. Here is a brief description of the categories: 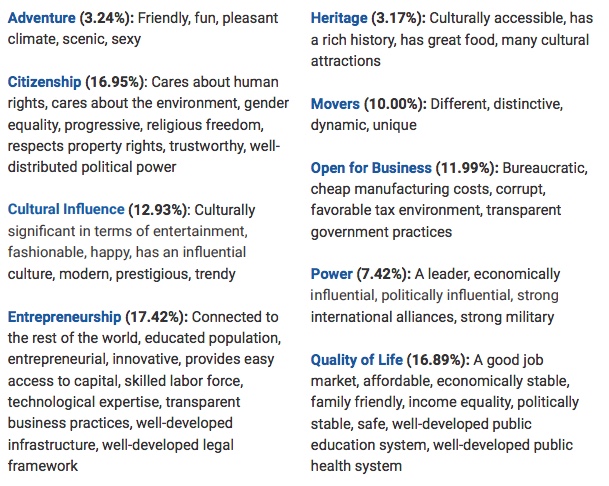 If we look at the quality of life ranking by itself, here are the top 10. As U.S. News & World Report points out, this metric looks at how well countries treat their citizens well through all phases of life. Scandinavian countries fared well, as did Australia and Canada.

In addition to these two rankings, I like to share the World Happiness Ranking, for 2018, from Wikipedia. All the top countries tend to have high values for all six of the key variables that have been found to support well-being: income, healthy life expectancy, social support, freedom, trust and generosity. I included the top 20 countries here so that the U.S. would appear.

The World Happiness Report is an annual publication of the United Nations Sustainable Development Solutions Network which contains rankings of national happiness and analysis of the data from various perspectives.

What makes this interesting is that the rankings were done by two different organizations, yet they came up with remarkably consistent rankings for Quality of Life and Happiness. When I think about it, the results make sense; a country that offers a high quality of life is likely going to lead to high perceptions of happiness among its citizens.

And if you believe that Happiness is something we all want, then it seems that concentrating on quality of life issues may be a great way to boost the happiness level of people. As noted above, Quality of Life includes a good job market, affordable, economically stable, family friendly, income equality, politically stable, safe, well-developed public education system, and a well-developed public health system.